Open 7-days per week from 10am until 5pm, Newcastle Castle is a family-friendly historic attraction that reveals the story of how Newcastle began, the reason the city got its name and is a chance to walk in the steps of the people who lived and died in the shadow of Newcastle Castle.

Steeped in history this imposing Norman fortress, in the centre of Newcastle Upon Tyne, is a rugged reminder of northern England’s turbulent history. This was no baron’s stately home.

The Castle is a grim reminder of royal authority where armies gathered, and criminals were imprisoned and executed. It is where the story of Newcastle began, the reason the city got its name and has the most commanding views over the city and the River Tyne.

This site uses Akismet to reduce spam. Learn how your comment data is processed. 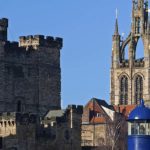